Titanium Dioxide Is No Longer Safe According to EFSA

The European Food Safety Authority, otherwise known as EFSA, recently declared that the commonly known food additive, Titanium Dioxide (E171), can no longer be regarded as safe when used as a food additive.

After reviewing all available scientific studies and data, the EFSA Panel on Food additives and Flavorings updated its safety assessment on TiO2 Titanium dioxide following a request by the European Commission.

The chair of the panel stated,

"Taking into account all available scientific studies and data, the panel concluded that Titanium Dioxide can no longer be considered as safe as a food additive. A critical element in reaching this conclusion is that we could not exclude genotoxicity concerns after the consumption of titanium dioxide particles. After oral ingestion, the absorption of titanium dioxide particles is low, however, they can accumulate in the body."

The main concern was the accumulation of the TiO2 nanoparticles in the body over time after oral ingestion and the associated risks as a food additive. Joe O'Neill, VP of Sales and Business Development at A&B Ingredients, believes that the EFSA's decision will have an impact globally including North American confectionery and chewing gum industries where Titanium Dioxide is used as an artificial whitening agent.

Although the FDA has not prohibited the use of Titanium Dioxide in foods, it is a point of consideration for the U.S. formulator as well, as they look to satisfy the consumer demand for clean label and natural ingredient solutions.

"The US-based food and confectionery manufacturers may take the lead from the recent EFSA ruling and start formulating with natural, clean label alternatives to Titanium Dioxide," says O'Neill. "Our portfolio includes HerbaMYL native and organic rice starches, all of which have small starch granules between 2 to 8 microns. The small granules act to fill in uneven surfaces on confectionery coatings and can create a smooth surface coating in products, such as breath mints and chewing gum. In line with our mission to offer clean label solutions from nature, the rice starches are an attractive alternative to Titanium Dioxide and can help with reducing chipping and cracking of the coatings. They are available in both conventional and organic forms." 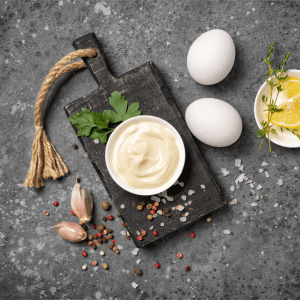 Titanium Dioxide (E171) may be used in mayonnaise as a whitening agent. 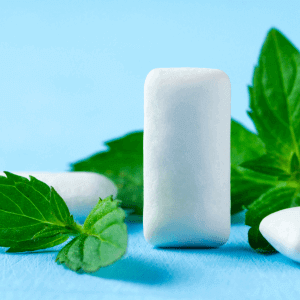 It has been well established that dietary composition and the foods we eat have a role in physiology and health. Recent studies have shown that the consumption of foods containing Titanium Dioxide nanoparticles can affect the gut microbiome and cause inflammation in the gut and in the digestive system, which can lead to diseases like colorectal cancer and inflammatory bowel disease. "Following the healthy eating trends and the clean label movement, it seems that Titanium Dioxide is now another additive which formulators will seek to replace," asserts Joe O'Neill.

WHAT IS TITANIUM DIOXIDE?

Titanium Dioxide is used as a coloring agent. It works as a pigment and gives a smooth white appearance to a range of food products, including confectionery, pastries, chewing gums, yogurt, ice cream, mayonnaise, and more. It helps formulators either return food to its natural color or is used to add color to make a product more aesthetically appealing.

Titanium Dioxide is widely used in foods such as bakery products, cake decorations, chocolate, candy, creamers, broths, soups, spreads, and processed nuts. Not only was it used as a whitening agent, but it also aided in food preservation and packaging.

TITANIUM DIOXIDE AND ITS GENOTOXICITY

Over the past several years, researchers and food safety personnel have had growing concerns regarding Titanium Dioxide's genotoxicity. Genotoxicity is defined as the ability of a chemical to affect and damage a cell's DNA. This internal cellular damage could cause mutations and could possibly have carcinogenic effects. When titanium dioxide is ingested, only a few particles are absorbed into the body. What worries food safety personnel, however, is the cumulative effect of ingesting this additive. The tests conducted to evaluate general toxicity were not entirely conclusive, but the concern for genotoxicity could not be eliminated. Thus, the EFSA could no longer establish a "safe" daily intake level.

FOOD COLORING AGENTS AND CONTROVERSY AROUND THEIR USAGE 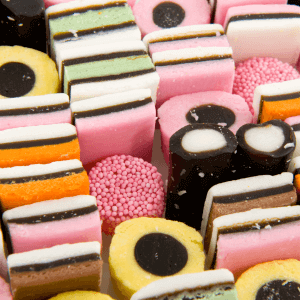 While people generally derive a food's value from its taste, the visual aspect of food is extremely important. Color undoubtedly provides food with a unique quality; it is an essential part of its sensory profile. Imagine someone shopping at a grocery store where every item was a dull gray color. Not only would it be difficult for the consumer to differentiate types of food, but it could also potentially decrease the person's appetite and motivation to buy it. To solve that issue, the food and beverage industry has developed an assortment of natural and artificial food coloring agents to help manufacturers develop food and beverage items that not only taste good but also look attractive in the eyes of a consumer. When you shop at a supermarket today, you see store shelves boasting with vibrant colors. When consumers see products with distinct coloring, they can quickly identify products they want and have a better experience that translates into increased sales.

Food coloring, however, has been an extremely controversial issue for the industry. There have been discrepancies regarding its safety and suitability as a food additive. Research has been conducted to test whether it can negatively affect children with ADHD and exacerbate symptoms with children who have autism spectrum disorders.

A&B Ingredients offers clean label ingredients that are natural, safe, and guaranteed to add value to food products. The company has a long history in pioneering new ingredient technologies and broad experience with rice starch technologies and applications. The HerbaMYL line of natural, clean label rice starches from A&B Ingredients, is an excellent and safe alternative to the food coloring agent, Titanium Dioxide. Our non-GMO, allergen-free rice starches are clean label and offer a host of technical benefits.

Additional advantages of rice starch are based on its starch granule size. The starch can deliver a smooth and creamy texture in dressings, sauces, and mayonnaise applications. It can be utilized in fat-free and low-fat formulations without altering the creamy texture that natural fat provides.